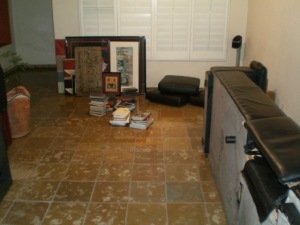 “The best laid plans of mice and men…” Steinbeck wrote it based off the Scottish writing of Robert Burns in the 1700’s (apparently this thought concept has been around a bit…obviously well proven).

Those of you who have been following along know that I was planning on leaving Tuesday morning on the way to L.A. to meet Dominic and begin the ride, but as fate would have it, things took a turn.  Today was the Peccole Community Assoc. garage sale.  This happens twice a year and has a huge turnout.  This was going to be the last opportunity to get rid of whatever remained prior to going to donations.  I left Rosa’s around 5:30am with the intention of having everything laid out for whoever showed up early, but as I walked up the driveway, I was greeted with a small stream flowing to the road and heard the thunderous roar of a mini Niagara.  It took me a moment to realize my water heater had blown up.  After I got the water main shut off I surveyed the damage hoping like hell it was contained to the garage.  Imagine my surprise when I opened the door to the house and had water spill over the threshold!

Then entire bottom floor had anywhere from a half inch to almost two inches of standing water…fairly warm water to boot.  I have to give the water heater credit…it was doing its damnedest to keep up.

The first guy on the repair crew showed up about an hour after I called the insurance carrier and shortly thereafter an entire crew armed with water extractors, blowers and dehumidifiers….enter bad memories of the Monte Carlo fire.

So as we took stuff to the garage, to remaining higher ground, the crew was surprised to see the amount of people who began showing up wanting to but things we were hauling out.  People will buy anything.

So at this point I know my departure will be delayed but I don’t know how long or how this will affect things.  I do know its not a good sign when the crew removed the slate baseboard and the kickpanels of the cabinets in order to dry the soaked studs behind them.