Too funny, the hotel we stayed in last night was a pretty swanky place…a place where one takes a girlfriend for a few hours of relaxation would probably be the safest way to put it.  The shower was of note because it had fancy curved glass doors (didn’t shut worth a damn) and a digitized system inside with radio and speakers….it didn’t however have a shower knob.  Ah well, we managed to get it to work well enough to use.  Trust me, a screwed up shower is still a shower!

We took off for Guamuchil early the next morning.  This is all pretty flat farmland with lots of corn.  Nothing really noteworthy, but very nice.

We got into Guamuchil mid-afternoon and ran smack dab into the longest line of busses I’ve ever seen.  There was a presidential political rally taking place and busses from all over the state of Sinaloa were to be found here.  Thankfully there wasn’t a lot of pedestrian traffic and we were able to navigate our way to “Centro”, the center, of town.

Never seen such a wide variety of busses all in one spot.

We hadn’t been riding very long before a young kid with a younger passenger pulled alongside.  I don’t recall what we asked him, but from that moment on Braulio was our constant guide while we were in town.  Braulio is 17 and his passenger was his 14-year-old brother.  We told them we needed a cheap hotel and within a few minutes he weaved his way through traffic to the front of just what we were looking for…cheap accommodations!  The owner/manager wanted 580 pesos for a triple room, but it wasn’t available on the first floor (very convenient to have if you don’t want to lug bikes upstairs).  We dickered with him on the price and he commented that he did have a very large room with four beds right down the hall.  We took a look and were sold for a whopping 405 pesos.

When we look for a place we are usually looking for; 1) price, 2) a/c, 3) wi-fi, 4) bike storage.  We really don’t require too much…and come to think of it, we usually don’t get too much, but it’s good enough for our needs.

After dropping the gear from our bikes Braulio took us to a nearby Banamex as I was running low on cash.  It was pretty warm out so it wasn’t surprising to see a group of people waiting their turn inside the ATM room.  I got in line with everyone else and when finally my turn my card wouldn’t work.  Not wanting to stop the flow, I just got back into line.  I realized it was a problem with what I had tried to do and the next time around it went smoothly….thank God!

When I came out I found Braulio’s father had showed up and he was talking with Dom and Pedro.  I think he wanted to check out who his son was showing around and take his younger son off his hands.  We asked him for some lunch options and he told Braulio where to take us.  In a moment we were off and soon were eating yet another great meal.  Funny how good each meal is after you’ve been cycling for a while.

We went back to the hotel for some siesta time and Braulio gave us his cell number and told us to call later.  I had given him 100 pesos for all his help and his eyes about popped out.  We crashed hard for probably four hours before getting cleaned up and ready for round two of Mexicana fare.

We decided we didn’t have anything to lose by calling Braulio and within 15 minutes he was at our door.  We were really surprised when we went outside and he had the family van curbside to take us to dinner.  We went to a great place where I feasted especially well on Menudo (tripe stew….yum) and Gorditas (little corn saucers which hold some meat, cheese, avocado, salsa etc…).  It was all incredibly good. 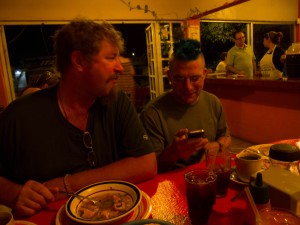 When we left we were all pretty stuffed but Braulio told us he was taking us for refreshes (usually it refers to a treat of shaved ice with a flavored topping).  We were all very surprised when he pulled up in front of his own house.  It turns out his Grandmother has a stand in front of the house and she sells these all day long.  They probably have 15 or so different flavors from Tequila to strawberry, guava to vanilla.  I picked Chili Mango with a little strawberry.  It was a very good combo.

All the family was there along with a good family from next door.  Everyone was interested in what we are doing.  We had a great time with them.

Braulio wanted to know what we wanted next and although I didn’t tell him why all I wanted was a bathroom…something wasn’t quite right…and for the next few days it wouldn’t be quite right.  Yep, oh great one with the cast iron stomach is the first one with issues.

Regardless it was a great evening.